It has been a pretty hectic period of time in my life: loads of bugs, and, experience. I’ve been thinking what I should write this post about as at the same time I have so little, but so much to tell that I don’t know where to start. After work, I decided that this day and my feelings about it would be best described in a post about a relationship… Between testers and developers…

The Love and Hate Relationship Between Testers and Developers

From my first day, developers for me were an object of investigation. I would try to get what kind of relationship I should expect us to have (sounds serious, doesn’t it?). I am a pretty funny and silly person at times and my contact with developers has been somehow… awkward. I would talk about my beloved bugs with lots of inner passion, love, and, laugh… I guess this may be called a bit unprofessional, but it’s me, and, I love my job with all its problems which I take as simple challenges, and, allow myself to joke around. However, this sometimes creates misunderstandings and developers are not used to see someone fight for their bug so much.

1. Developers may hate testers only in two cases:
a) bug was found
b) bug was not found
To sum this up: no outcome is good enough.

Of course, we are a team. We try to create bug-free software and seek for the best product possible.

However, in the case a) usual scenario is like this: a developer writes to the tester asking whether it really is our problem. Maybe we could blame something else? Maybe it was there before, not only in this release. Check this, and, that, and, this also more.
While dev leader also always asks us how many bugs we are going to find in the future, how many they should expect – my answer was very simple: as many as you have done in your code (he is always very confident, but that time he blushed and got silent). 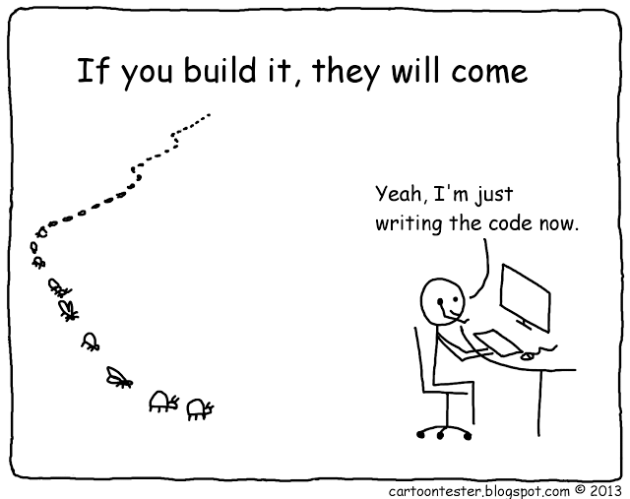 In general, developers are lazy. They try to avoid work as much as possible. Sometimes testers have to explain 5 times and share screen to make them fix bugs. Also, it happens that they don’t bother to read notes, details, comments, on bugs we give them. Just reads the start and assumes. Afterwards, marks it as cannot reproduce without even trying. Or, another possibility is, that they blindly follow steps and don’t even waste time to try to get the same result in a different way which is quite obvious, but it’s not written down.
I must admit that in a case, I hate developers a little bit, too (I love them more, though!).

In the case b) as I mentioned before… Testers are going to be blamed for leftover bugs. Developers may just put all responsibility on our tiny shoulders by saying: your fault that you did not see that obvious bug and now users suffer, bad tester.

2. Developers and testers actually silently love each other: for finding bugs, fixing them, and, making a good product together.

Today I got so amazed by our developers as they fixed so many new defects quickly. Of course, my happiness did not last too long as some of their fixes had to be rejected and did not work properly. However, I really feel that it’s magical that they manage to fix those bugs that we just write down. Some bugs are very tricky, and, developers get to know them, understand them, find their reasons, and, fix them. I feel happy when my bugs get attention, are taken seriously, and, are taken care of!

And, even if they will never admit that because of 1 a), but… I believe that they secretly love testers back. A little bit. For helping them improve and giving a lot of interesting riddles (aka bugs) to solve.

I am not sure whether any film company will buy a script for a movie about a relationship like that, but, I find it fascinating.